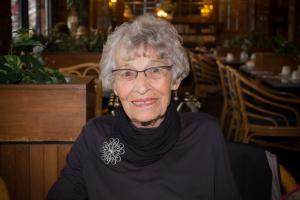 First off, I want to apologize for my lacking of photo content on all my sites this month, but I am not going to lie, 2018 has gotten off to a terrible start for yours truly. The fact it is January only adds to the misery. It has not been my month, I got a head cold that lasted a week and absolutely drove me down into the large snowbanks that once this winter covered southern Ontario, I haven’t gone on any photo excursions yet, I am still struggling with my well-documented weight problems and just this past week, my dear grandmother, Ruth, passed away peacefully in her 91st year, which has taken a bit of a toll on me. Nana was the most unselfish, caring, and wonderful woman that I ever knew and I will miss her presence in the years to come. While I have grieved about it and handled it very well before and after she passed I am also relieved that she no longer has to suffer on Earth after she broke both her hips at different times and her body was just quitting on her. It seems a bit like a storybook ending as her old house was sold last October and she was around to hear the good news while still in the nursing home. I last spoke with her just after the new year and we talked about our holidays and Christmas, among other things, gave her a hug and a kiss before I left, not knowing that would be the last time on Earth I would talk to her. When I found out she was getting low and it was likely her last days on Earth, I felt so guilty because I didn’t get the chance to speak to her while she was alert, but my mother told me that Nana (as I like to call her) knew that God was on the verge of calling her home to Heaven and that I was working that day and she would completely understand and would not want me to feel bad. I saw her when she was unconscious on her death bed and I said hello and reminded her of all the amazingly good times that we had and we were so blessed to have her for 90+ years and so many memories, and then I said to Nana, “See you later.” Then the next morning, God made the call for her to come into His kingdom. From this day forward, very time I think of my Nana, I will not cry or grieve, but will have a smile on my face, knowing how amazing of a life she lived with absolutely no regrets and how I have nothing but cherished memories of her. After all, I know she probably say (as she did many times on Earth), “Meh, don’t worry about me.” We can only grieve for so long. But to anyone who reads this, do myself, yourself and your family and relatives a favour, please give them a hug and show your love for them every time to say hello and goodbye, because you just never know when you might see them for the
last time on Earth.

The picture you see posted was one that yours truly took of my beautiful Nana on her 90th birthday and I was honoured it was used in the Eulogy and the programs. Not very often you get to see someone pictured like that on their 90th birthday!

When all has now been said and done, I still have an optimistic outlook for 2018. I have ordered study material to memorize about Windows 10 and to take an exam for myself and for the IT service company I work for. I will be heading to Minneapolis/St. Paul, Minnesota in a little over a month, so I gotta get some inspiration from IG and Google Maps to scout out the best locations for pictures in the Twin Cities. As well, I will be heading to a couple of hockey games, namely when my Detroit Red Wings come into town to take on the Minnesota Wild! Should be a fun trip, no matter what happens, even if the Canadian Dollar does take a hit with all the uncertainty with the NAFTA talks, which also worries me that the relationship between us and our neighbours to the south could be turning sour, but most importantly, many jobs are on the line. I am not one to ever, EVER engage in politics because it fuels hatred and makes us less as one in the human race. So, I will leave the reasons behind this untouched. Still holding my head up high, I have plans to fix some of the ills in my life and I assure you, the camera will be out and shooting again very soon!

So, thank you all for sticking with me during this very difficult month and hope to chat and meet up with some of you in the coming year!

Until next time, God Bless, talk to you guys later!